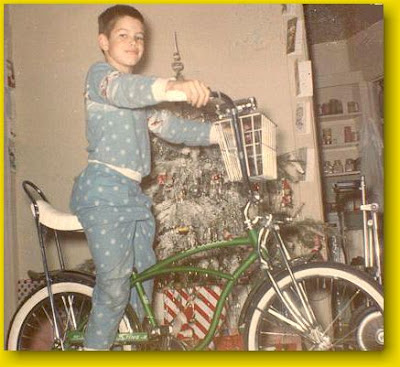 Watching McCain/Palin rallies on You-Tube tonight prompted me to say the rosary, maybe tomorrow I'll say a novena. These people are scarier than an NFL lineman on a cold, Sunday afternoon. The words, feelings and ideas they spew make me wonder if we are from the same country. Or even the same planet. While Palin continues to stoke the "Obama's buddy is a terrorist" speech, I am compelled to learn more about the infamous Bill Ayers. The Weather Underground, I remember in a vague way, mixed up with my first tie-dyed shirt and eating King Vitamin cereal while my dad watched the news. My research reveals that Bill Ayers was charged with "conspiracy to bomb" but the charges were dropped because of prosecutorial misconduct. What does that mean? I guess someone who should have known better did something that made the charges null and void. That was in the early seventies. I don't remember that at all, but by then I was busy acquiring a world class 45RPM record collection and riding my Sting Ray around town pretending to be an outlaw biker. I was born in 1960. Obama in 1961. I wonder what Barrack was doing then?
Posted by Lorraine DeLuca Placido at 11:27 PM

I really do not know where to start with a comment to this most recent ? Blog. This Bill Ayers person who you are excusing as not being a questionable Pal of your Barak candidate even has me ,one of -your fans,actually beginning to question YOU!I now I know what people mean when they say that if you like someone you should avoid talking Politics and Religion. So I think that it is time for me to do exactly that.Before I do though I would like to say,"May the best man win in November and May God Help Us no matter which one of these men it will be!!!

I'm going to say a novena with you as well. If McClain wins, "We the People" will not see a "most perfect union" and people will be wondering what was so bad about George W. Bush after all. I think it's also my constitutional right to point out to anonymous that freedom of speech and the press is our right as citizens of the United States. In my eyes, you’re a great writer - a great writer creates controversy! Darby Girl - you keep on having your perspective! Its your right!

Anonymous, The Federal Government DROPPED the case. Maybe McCain should drop it as well and focus on what our country needs here and now. I hate when politicians try to divert our attention from what is really important with the irrelevant. Does it matter that Barack Obama worked in a community organization with a University of Chicago professor? Only when we find out the professor once was something else? Wow. If we looked at all the people you, me or anyone else worked with, played with, went to church with etc. I am sure you'd find some unsavory characters. Hindsight is 20-20 vision.