“I’m strict,” Dottie Sandusky told the court with a proud tilt of her chin. “I like for things to go in a certain way." 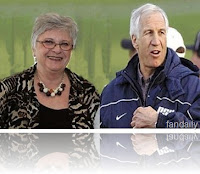 Don't we all? Life has a way of teaching us, usually sooner rather than later, that we have very little control over the biggest things in our lives. For me that lesson was learned after the birth of my first child. I imagined how our days would unfold, my husband, baby and me. I mentally created the idyllic holidays around the fire, the prize winning Halloween costumes and I looked forward to an idealized version of the modern family. Until day two. Two days home from the hospital, late into a Saturday evening, well, Sunday morning, after rocking and nursing and singing to a screaming baby for over an hour or so there was silence. Finally asleep. I glanced down in the darkened room at the little stranger and was astounded to find her not asleep, but wide eyed, staring deeply into my own eyes. This was not the baby of my imagination but a living, breathing, beautiful human being with desires and ideas of her own. That desire was to stay awake, that lesson was enormous.

The life I lived was never quite the same as the one I envisioned. Holidays were not idyllic, but loud and boisterous (there was a fire in the hearth) and Halloween each year started with great intentions, subjected to the revisions of a 9 year old that turned the jolly clown costume into the clown from Poltergeist. I grew and changed as I learned that those things I wanted were not always the same as the things my kids needed.

Our home was not haphazard, there were family meals every day and bedtime stories every night but there wasn't always clean underwear or matching socks. I allowed my kids to take a couple not really sick, sick days every school year because sometimes on a cold winter day it is a lot nicer to make pizzelles with your Mom, or watch a movie with Grandmom. I don't think it affected their educational or intellectual ability too much.

Despite my not so strict standards, I paid attention. I noticed when one of my kids was unusually quiet, I banged on bedroom doors when something seemed weird (it was weird, someone had snuck a frog into bed with them). I knew when a beer was missing or someone came in smelling like cigarette smoke. I watched guests and relatives with the ferocity of a Mama Bear. I trusted my children's well being to no one. I questioned my sanity when I made a blanket rule that we don't do sleepovers (best rule ever btw). I did this because I knew that although I might "like for things to go in a certain way" that doesn't always happen. My job was to be sure that the wrong things were things that didn't matter too much.

As a mother, I am disappointed and angry with Dottie Sandusky, a woman who prided herself on running a tight ship while ignoring the fact that the boat was sinking beneath her feet. Did she know? It will be the next big question and one that only Dottie can (and did) answer. If she really did not have an inkling to her husband's behavior, as she testified in court, where was Dottie looking? What filled Dottie's life so fully that she didn't even once think that something was awry in her home?

Dottie Sandusky has something to teach all of us, maybe someday we'll know what that lesson is.

Posted by Lorraine DeLuca Placido at 1:33 AM