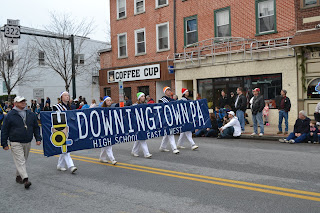 I guess everyone loves a parade and yesterday I watched Downingtown Borough's Christmas Parade. A lot of people say they live in Downingtown but like me they have a D'town post office but live in Uwchlan Twp. Lionville, Upper Uwchlan Twp., etc.. The Borough of Downingtown is not very big actually and like my hometown, Darby Borough, it is an old mill town. Whenever I am in Downingtown Borough I see the similiarities to the Darby Borough of my youth. Many of the residents are members of the Firehouse, the Moose Club holds "Family Night Dinner" on Wednesdays and the VFW always has some activity or event going on. There is a diner, a jeweler, a bunch of hairdressers where the older women still get a wash and set. So, naturally, I thought of Darby while watching the Christmas Parade and for a few minutes I was in Darby, the band in Blue could have been DC Marching Band and the Clowns teasing the kids could have been anyone's Dad. Problem was, like in a weird dream of home, where nothing makes sense, I didn't recognize anyone. The "Good Neighbor Community" is not mine and it has been decades of years since a parade marched down Main Street in Darby. So what made two boroughs with a similar history and demographic diverge so sharply?
Posted by Lorraine DeLuca Placido at 9:37 PM