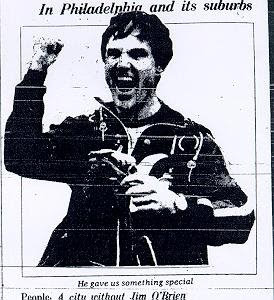 I don't normally notice my age, or anyone else's for that matter but something interesting is happening to me and it is thoroughly age related. I have become a fount (or is it font, like print?)of historical knowledge mostly because I was there when it happened. Helping my college-aged daughter with some research, I came across an article about Jim O'Brien. Excitedly, I read on and saw another about Edie Huggins. My daughter has never heard of either of them and couldn't appreciate my story about interviewing these two local celebrities during my own college years. I even drove Jim O'Brien to my school in a musty old car that someone in the newspaper office borrowed from someone else's grandpop. I'd almost forgotten that period of my life, not long enough to even be considered a chapter, more like a non-sequiter that would have been removed by the editor. It was that short period just after high school, before I quit college, when I thought I would live my life as a writer. When dashing around Philly in an old Buick trying to find the place I was to pick up Jim O'Brien was as exciting as the whole of all previous 18 Christmases that came before it. By the New Year I had changed my mind. Or closed it. Or something like that. I think that was the part where the real editor came in.
Posted by Lorraine DeLuca Placido at 11:05 PM